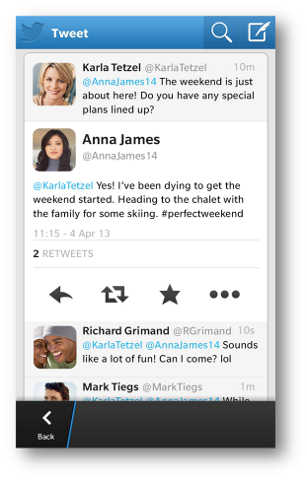 A number of significant changes have been made to Twitter’s BlackBerry 10 app. Developed by BlackBerry, not Twitter, the app is getting a number of standard features from other apps.

For example, the compose tweet screen now supports the addition of photos, the option to send a direct message is positioned under the ‘Me’ tab — as on other mobile apps — while profile pictures, header images and bios can be edited and changed directly from a BlackBerry 10 device. Equally, images now show in full screen and are zoomable, while users can be blocked and reported as spam from the app, among many other tweaks.

3. Edit Profile – You can now edit your profile picture, header, and details from your BlackBerry 10 smartphone.

4. Improved Image Viewing – You can now view pic.twitter.com full screen images, as well as pinch to zoom and pan images from the Tweet details. Also, you can view full screen profile pictures from other Twitter users.

5. Deleting Tweets – You are now able to delete your own tweets from any screen where their tweet is displayed. It’s as simple as holding down on a tweet and selecting the trash icon.

6. Block and Report as Spam – Block and report users as spam.

7. Enhanced Menu – Do more from the timeline, with new options to “Quote Tweet” after selecting “Retweet” as well as “Open Tweet” to view the tweet details page.

Let’s Introduce You To Android 12

Dealing Crypto without Naira got easy…