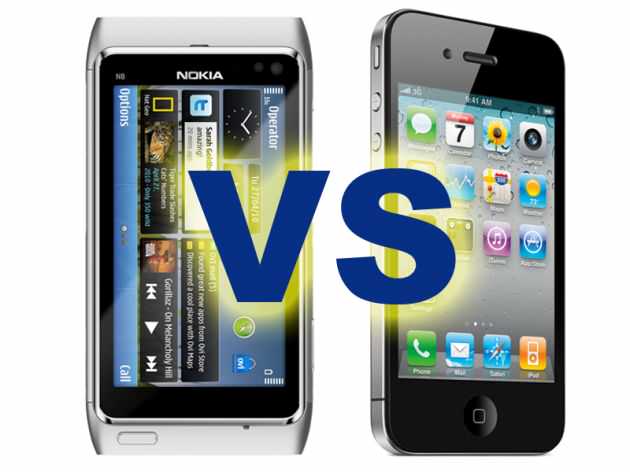 First of all, let's face the bitter truth that there is no perfect smartphone on earth, but still we could consider that there is one smartest out there. Both Nokia N8 and iPhone 4 are candidates, so we will see which part of my lists does Nokia N8 really standout against iPhone 4.1. Price
One of the biggest advantage of Nokia N8 over the iPhone 4 is the price. With the price tag of $420 (70000 naira) comparing to the iPhone 4 (unlocked)
16GB with a price of $900 (135000 naira) therefore making the Nokia N8 much cheaper for a smartphone with cool multimedia features and especially Symbian Belle OS.2. Design
We admit that the iPhone 4 is slimmer, but there are consequences on this, like on the camera performance e.g. zooming and sensor size. For the color variants of Nokia N8, the mass already have a wide choice for their taste on the color. There are currently 5 anodized casing for N8, the dark grey, silver white, green, blue and orange. For the iPhone 4,
there are only two, the white and the black and obviously I don't like that my
phone is mistakenly identified by others as an iPhone 3GS or iPod touch.3. Video Call
The limitations of Apple facetime for the Wi-Fi connection and iPhone to iPhone is what Nokia already solved and made possible long time ago to their devices. So in N8 you will not be bounded by connections and you will get
connected for the video calls in any capable devices.4. HDMI + Dolby Surround
Another one few specs that a modern
smartphone have is the HDMI connection where you can connect to your home theatre. With HD TV you will get a crisp and clear visual treatment as well as with your sound with the Dolby Digital Plus.5. Memory
The Nokia N8 has a 16GB internal storage plus giving you a chance to add an external hot swappable microSD card up to 32GB, taking it to a total of 48GB while the iPhone 4 gives maximum 32GB.6. USB On-the-Go
If 48GB of storage is not enough for you then consider this USB on-the-go feature where you can read and make slave USB sticks from external hard drive like 250GB hdd.7. Usability (Reception issue)
If you're afraid to get a bad reception just because of the phone's inability to not allow you to have a proper grip, well, isn't that obvious that this could be one of the biggest mistake that Cupertino company made?
We all know that this Finnish giant have more than 1 billion of devices out there and we never have the incidents where people protests just because of the reception issue.8. Sensor
To have the biggest camera sensor in the field of camera phones—and even bigger than the other p&s cameras—means that we are having the right innovations. By the size of the N8 and to its one of a kind features, it really shows that this is an advance feature that Nokia N8 will hold against competitors.9. Xenon flash
It is still a strong advert of manufacturers that LED flash can provide you enough light for taking pictures. But it is still a fact that xenon flash are the one who leads in the technology of flash for compact cameras as well as to mobile phones. What Nokia did is they reduced the size of the flash to 30% less compare to Nokia N82 & without losing the power.10. Editing software & Ovi Maps are free
(Symbian^3)
If your phone has an HD capable video
recording and Symbian^3 on N8 has an on-board video editor and without pulling some extra cash from your pocket of course, that would surely be a better deal.
The same on Ovi Maps, neither we need a connection nor we would pay for it. That is really the magic of Nokia, bringing us connected anywhere and anytime.
Obviously, at Stalyfblog, we are not biased on posting articles nor are we against iPhone 4.So what do you think? Which of the phone would you buy? Let's get your thoughts as usual through the comment form.

Flutterwave is now valued at over $1Billion